Bringing a Vision to Life through Innovative Community Development

The Major Owens Center offers affordable housing, recreational opportunities, and nonprofit space for the Crown Heights community, and honors the legacy of the late Congressman Major R. Owens—a longtime advocate and voice for the community. In his more than 50 years in public service–as a local information librarian, Community Development Agency commissioner, New York State Senator, and US Representative—Owens was an unwavering civil rights and disability rights supporter and promoter of social justice.

Square feet of multi-sport courts and a swimming pool

Square feet of multi-sport courts and a swimming pool

The Major Owens Center is a focal point for community and culture that features:

These organizations provide educational, recreational, and cultural opportunities along with career-development and healthcare services.

The Major Owens Center, formerly the Bedford Union Armory, occupies nearly an entire city block in Crown Heights, Brooklyn, covering approximately three acres of land. Opened in 1908, the Armory was used by the US Army’s Cavalry Troop C for training and equipment storage, in addition to serving as a horse stable. When not being used for military purposes, the large, open space provided an excellent venue for sporting events and local community gatherings. Sometime after 2008, Congressman Owens, then a professor at nearby Medgar Evers college, began to envision a future for the Armory as a full-time community center with recreational opportunities and gathering spaces for Crown Heights. Along with his students and other stakeholders, he built local support for the idea. The military decommissioned the building in 2013, and the City of New York took ownership of the site.

In 2013, local elected officials asked NYCEDC to issue a request for proposals (RFP) to redevelop the vacant site and transform it into a space for housing, jobs, and the community. After years of extensive engagement with residents, business owners, elected officials, and other local stakeholders to better understand the needs of the Crown Heights community, it was evident that residents shared Congressman Owens’s desire for an institution that would positively support the vibrant communities of Crown Heights and greater Central Brooklyn.

Specifically, the community expressed the need for affordable recreational opportunities for all ages (including a swimming pool) and space for local nonprofits to offer cultural, educational, and healthcare services. With the community’s ideas in mind, in 2015 NYCEDC selected a proposal from Bedford Courts LLC, an affiliate of BFC Partners, that most closely aligned with this vision for the future of the site.

Having these community organizations under one roof will change lives. This place will strengthen the community, strengthen families, and offer youth the opportunity to pursue their dreams.
Geoffrey A. Davis
Executive director, James E. Davis Foundation

The Major Owens Center represents the culmination of a years-long effort by the Crown Heights community to honor and cherish the past, while bringing to fruition its vision for the future—where a new generation will create their own memories and build closer connections to the community and to each other.

View photos showcasing the past, present, and future of the new Major Owens Center in Crown Heights, Brooklyn

The refurbished interior of the Major Owens Center

The outside façade of the Major Owens Center

The outside façade of the Major Owens Center, formerly the Bedford Union Armory

Construction crew on site at the Major Owens Center

Inside the Major Owens Center

Learn more about the project and how you can get involved. 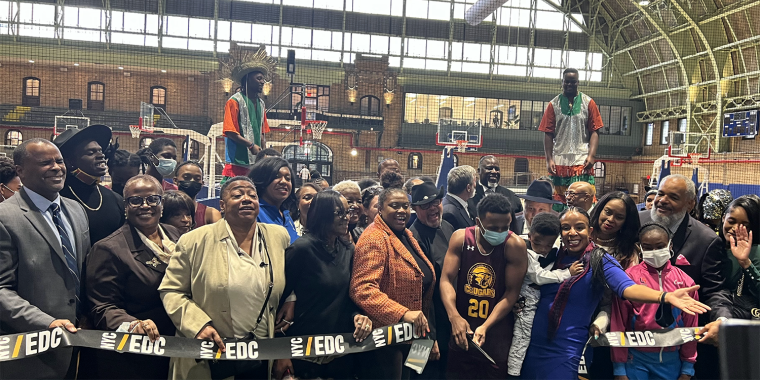