Leveraging the largest port on the East Coast and an extensive network of waterways, railways, landings, and cargo facilities, NYC’s transportation industry is central to the city’s prosperity, enabling the movement of goods—and people—into, out of, and around NYC.

In personal income for New Yorkers generated by the maritime industry

In personal income for New Yorkers generated by the maritime industry

PortNYC: A Backbone of Commerce

NYC’s ports are America’s gateway to the largest and wealthiest consumer market in the US. PortNYC supports the local economy by enabling firms to bring goods to market by vessel, the most efficient modes of freight transportation.

Approximately 400,000 of these containers moved through the city’s seaports, and recent infrastructure upgrades to marine cargo terminals will allow more than a million tons of cargo to arrive by water instead of truck. The City secures and promotes strategic areas along the waterfront by designating these areas Significant Maritime and Industrial Areas (SMIAs). Some of the North Atlantic’s largest concentration of workboats and vessel repair operations are located within NYC SMIAs.

Through NYCruise, the City manages the Manhattan and Brooklyn Cruise Terminals, which serve the world’s most spectacular passenger ships. With a recent $250 million investment in the terminals, the City modernized facilities to provide passengers a smooth and efficient embarking and debarking experience. Continued investments, and the industry’s top awards, have made NYCruise the departure point for more than 1.2 million passengers annually, creating lasting memories and supporting over $228 million in local economic impact from tourism spending.

Part of PortNYC, the DockNYC service helps vessels—including those used for tug and barge operations; excursions; recreational outings; and cultural, historic, and educational trips—access berthing locations throughout the city, offering a variety of amenities and utilities throughout the harbor.

NYC's first-ever mitigation bank, exclusively available for environmental impact offsetting on projects being undertaken in select parts of the city.

PortNYC maintains 23 ferry landings throughout the city, supporting both the incredibly popular NYC Ferry service as well as a variety of private ferry operators. These ferry services have unlocked the economic potential of the city’s waterfront communities, supporting millions of passenger journeys by facilitating frequent, dependable service to and between the five boroughs.

The Future of Maritime

Through PortNYC and other initiatives, we’re working to ensure both the long-term health of the maritime industry in NYC and the city’s economy as a whole. Our efforts include:

NYC’s visionary plan to develop a freight system that is modern, environmentally sustainable, and resilient—all while creating good jobs for New Yorkers.

NYCEDC and the Port Authority of New York and New Jersey (PANYNJ) have been working to upgrade air cargo facilities at JFK Airport. Recent projects have included an airport truck stop with parking and fueling, a new animal handling facility, authorization of a route for 53’ tractor-trailers, and the establishment of Gateway JFK, a Business Improvement District focused on off-airport cargo businesses.

In 2004, the City of New York and PANYNJ signed a 50-year lease for both JFK and LaGuardia airports. The long-term lease was the catalyst for the creation of the Aviation office within NYCEDC, which works to maintain the long-term economic viability of NYC airports.

NYCEDC oversees two of the three heliports located in Manhattan, including 34th Street and Downtown Manhattan. Each heliport provides charter and commuter services. The Downtown Heliport, located on Pier 6 on the East River, also provides public sightseeing tours which follow overwater routes in New York Harbor and the Hudson River. Through the DockNYC program, NYCEDC also oversees the seaplane facility located at the Skyport Marina on E. 23rd. Street.

Guidelines for the inspection, assessment and monitoring of waterfront structures 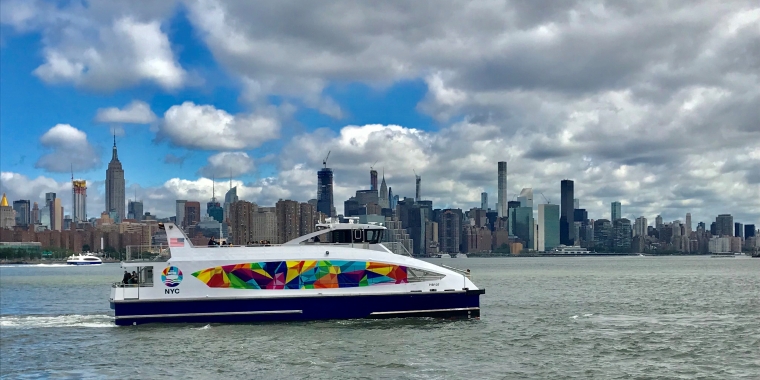