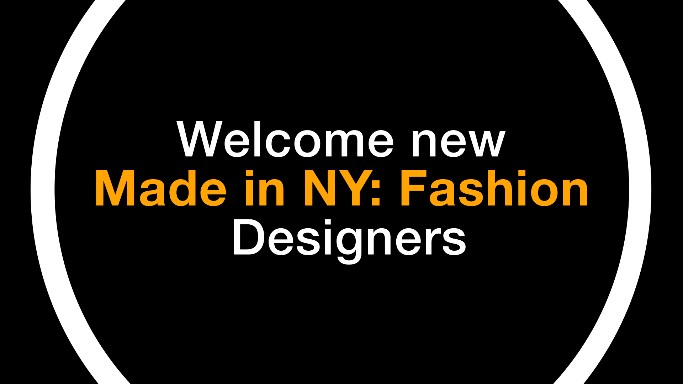 In 2015, Mayor de Blasio launched MiNY: Fashion with a $15 million investment to support local designers and fashion production. The initiative supports emerging designers and brands, galvanizes the fashion design and manufacturing community, and cultivates a pipeline of industry talent. Building on that investment, the de Blasio Administration invested over $100 million to strengthen NYC’s fashion industry by promoting Made in NY designers and developing new, affordable workspace for local fashion manufacturers, including the creation of New York City’s first Made in NY Manufacturing Campus at Bush Terminal in Sunset Park, Brooklyn.

In collaboration with fashion industry leaders, Made in NY: Fashion is responsible for creating, developing, and implementing an array of specific programs to fortify fashion’s design, manufacturing, and educational sectors. The MiNY: Fashion designation grants use of the distinguished “Made in NY” mark for qualifying businesses, which boosts awareness of support for local manufacturing, job creation and purchasing of clothing designed or produced in the five boroughs. As of January 2018, there are 46 MiNY: Fashion designated designers that manufacture 75 percent of their production in New York City.

A full list of MiNY: Fashion designated fashion designers can be found on the Made in NY: Fashion website, a one-stop-shop for information on attaining designation, funding, and resources to support their brands.

“New York City’s iconic fashion industry is a big driver of our economy and is powered by its creativity and entrepreneurial spirit. Initiatives like Made in NY: Fashion makes sure the world knows that our talented designers, iconic brand power, and market proximity are an unparalleled combination,” said Deputy Mayor Alicia Glen.

The New York City’s $98 billion fashion industry is one of the main drivers of the city’s economy with over 900 fashion companies headquartered in the metro area that employ more than 182,000 people (5% of the City’s workforce). The industry generates over $11B in wages and nearly $2B in city tax revenue annually. Fashion production represents over 30% of manufacturing jobs in the five boroughs, making New York City the second largest hub of garment manufacturing in the country. New York City is also home to the world’s top fashion design schools such as the Fashion Institute of Technology, Parsons School of Design, Pratt Institute, and LIM College.

In addition to the MiNY: Fashion program, the Fashion Manufacturing Initiative (FMI) was launched in 2013 in partnership with The Council of Fashion Designers of America (CFDA) and their Founding Partner Andrew Rosen. It was created to nurture, elevate, and preserve garment production in New York City, ultimately providing a way to connect fashion designers with local manufacturing. The FMI program includes the FMI Grant Program, workforce development, the NYC Production Resources Database, and professional development & Made in NY collaborations.