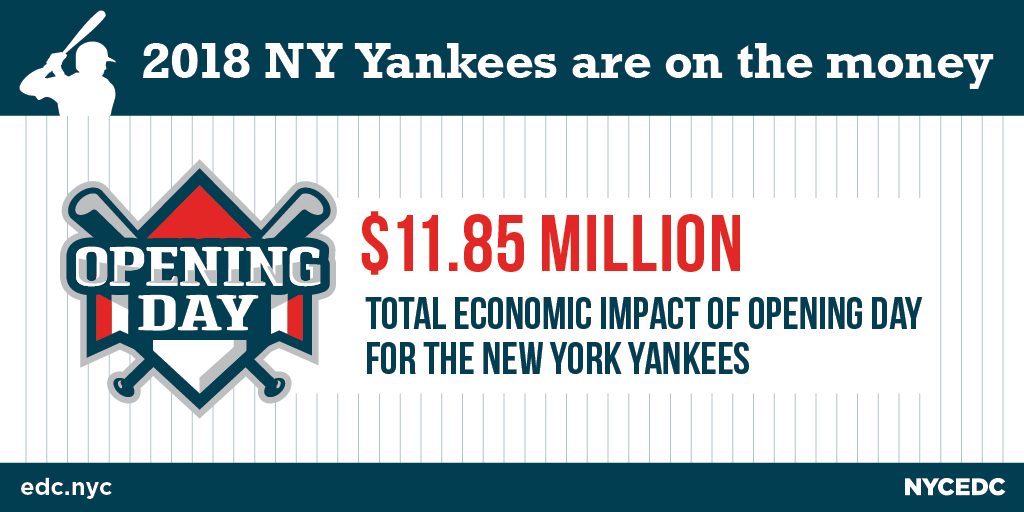 Direct impact of the home opener game accounts for $6.6 million in visitor spending

The analysis accounts for $6.66 million in direct impact resulting from visitor spending – including ticket sales, concession and merchandise spending, and transportation costs. Approximately 25,584 visitors travel to New York City with the main purpose of attending the Opening Day game. Today’s home opener also creates $5.2 million in indirect economic impact, which takes into account the spending of Yankee Stadium employees and companies who benefit from the spike in visitor expenditure. The economic impact of the Yankees home opener is higher than this year’s Mets Opening Day economic impact, largely because of higher ticket pricing for Yankees’ games.

“Opening day at Yankee Stadium is as big of a deal for the city’s economy as it is for the fans, creating a significant stimulus for the organization’s employees and many related businesses,” said NYCEDC President James Patchett. “With a combined impact of nearly $20 million from the Yankees and Mets home openers, this news is as exciting as a Subway Series!”

Mayor Bill de Blasio recently announced that the city welcomed an all-time high 62 million visitors in 2017, a 3.8 percent jump from the previous year, including 13.1 million international tourists. With more than a dozen professional teams in the New York metro area, competitive sports play a major role in New York City’s tourism industry, driving investment in the city’s economy and contributing to good jobs.