87% of all riders reside within New York City, which indicates NYC Ferry is largely used for commuting

NEW YORK, NY—New York City Economic Development Corporation (NYCEDC) today released the results of a survey of over 1,300 NYC Ferry riders. The survey found that across all three active routes (East River, South Brooklyn, and Rockaway), 93% of riders gave NYC Ferry a customer satisfaction rating of seven or higher on a ten-point scale, with 66% giving the highest possible score. Findings also show that 87% of riders are New York City residents, with 85% of weekend riders and 90% of peak-hour riders residing in the five boroughs.

In an effort to better understand ridership patterns and preferences, NYCEDC crafted survey questions to gauge demographic information, customer satisfaction, and usage patterns. Key findings of the survey include:

Rider Satisfaction. 93% of riders gave NYC Ferry a satisfaction rating of 7 or higher. 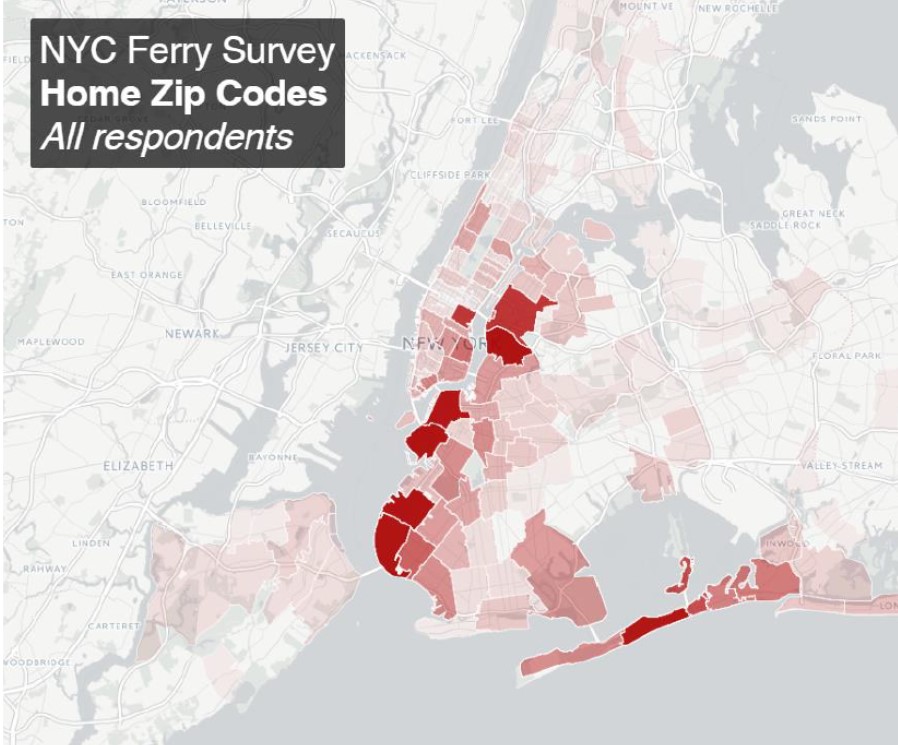 Trip Frequency. More than half of peak hour riders (53%) use the ferry on a regular basis, while the majority of off-peak riders (73%) are still trying it for the first time or are occasional users.

Ticket Purchase Method. Half of riders use the NYC Ferry mobile app to purchase tickets—though that number is slightly higher for peak hour riders (63%) and lower for off-peak riders (41%).

The survey results were also used to generate a Net Promoter Score (NPS), which measures the willingness of customers to recommend a company's products or services to others and allows for benchmarks and comparisons between different companies and brands. NYC Ferry received an NPS of 71 out of 100, with scores of 50 and above generally considered extremely positive. As a point of comparison, Bose has an average NPS of 78 and Apple iPhone has an NPS of 63.

NYCEDC staff distributed surveys to riders aboard NYC Ferry vessels and collected responses as passengers disembarked. Responses were collected on all active routes over two weekends and eight weekdays during five time blocks: weekday morning, mid-day, and evening, and weekend morning and afternoon. Findings are based on 1,345 total responses.

“We’re excited that after less than four months, the vast majority of riders have had a positive experience with NYC Ferry,” said NYCEDC President & CEO James Patchett. “We’re also seeing the service meeting our goal of supporting commuters around the five boroughs. With Astoria service launching next week, we can’t wait to bring NYC Ferry to even more neighborhoods.”

“The NYC Ferry Team is excited to see our riders taking advantage of and enjoying the newest way to work, live, play throughout New York Harbor,” said Cameron Clark, Senior VP of NYC Ferry by Hornblower. “With the Astoria Route launching Tuesday, along with two additional routes next summer, riders will have more opportunities to experience new connections across the city as we continue to enhance the ferry experience and listen to our riders who have helped make the service a huge success.”

Earlier this week, NYCEDC released the NYC Ferry Astoria Route schedule, the final route to launch in 2017. Starting Tuesday, August 29 at 6:30am, the Astoria Route will make stops at Astoria, Roosevelt Island, Long Island City, East 34th Street in Midtown Manhattan, and Wall Street's Pier 11, shortening commutes for thousands of New Yorkers. Astoria Route passengers will also be able to transfer to all other NYC Ferry routes at East 34th Street and Wall Street’s Pier 11. Detailed timetables, along with a map of all 2017 routes, can be viewed here.

The opening of the Astoria Route follows the successful launches of the Rockaway and South Brooklyn Routes, and the integration of the East River Route. Combined, the routes have served over 1.4 million riders to date.

Once the NYC Ferry system is fully operational, the combined routes will cover more than 60 miles of waterway at $2.75 per ride, the same cost of a subway ride, and the cost of a 30-day unlimited ferry pass will be $121, mirroring the cost of a 30-day MetroCard. This price builds on Mayor de Blasio's commitment to ensuring that NYC Ferry is affordable to New Yorkers. The two final routes, Lower East Side and Soundview, will launch next year.

Due to high demand, NYC Ferry recently announced that it will be adding capacity to three of its twenty boats. These new boats will be outfitted with bigger engines and a capacity of up to 250 passengers.

NYC Ferry homeport construction is currently underway at the Brooklyn Navy Yard. The 56,000-square-foot maintenance and storage facility will include berthing space for up to 25 boats, supplies and parts, and utilities, including a 40,000-gallon diesel fueling system. The homeport will also be the site for routine maintenance, including exterior and interior cleaning, restocking of food and beverage items, fueling, and basic repairs. It will be fully outfitted by early 2018.

Additionally, there will be a new ferry landing at the Brooklyn Navy Yard on the East River Route, slated to start service by fall 2018. NYC Ferry is hiring for various jobs, including captains and deckhands. Jobseekers can apply directly through Hornblower's website, www.ferry.nyc. NYC Ferry will ultimately provide 200 jobs, all of which will pay the City's Living Wage or higher and includes comprehensive benefits.

Ferry riders can download the NYC Ferry app to purchase e-tickets, allowing for easy scan-and-go boarding, get detailed maps and schedules, and receive real-time notifications and service alerts. Use of the app provides a more environmentally friendly service by reducing the use of paper tickets, although ticketing kiosks will also be available at each landing. The NYC Ferry app is live and available for download in both the Apple and Google Play stores.

For those seeking inspiration for their NYC Ferry travels, NYC & Company has listed suggested places to check out by neighborhood at nycgo.com/nycferry and encourage sharing experiences on social media using the hashtag #seeyourcity.